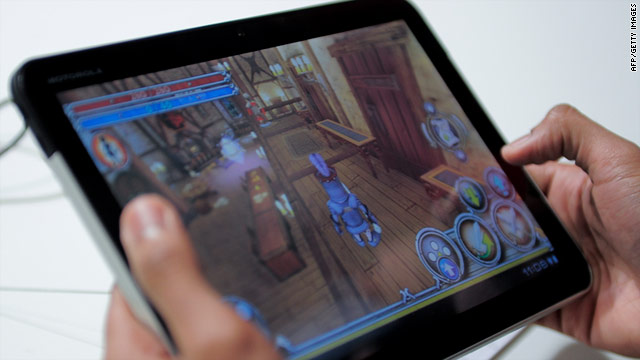 The Xoom, which can connect to Verizon's 3G wireless internet, will cost $600 for customers who sign a two-year contract with the carrier, Verizon said Tuesday.

Data service will cost $20 for 1 gigabyte of bandwidth per month, and Verizon will offer more expensive plans for heavier usage.

Owners will be able to upgrade the Xoom to connect to Verizon's faster 4G data service for free at some point in the next several months. Verizon didn't say exactly how this would be done.

Some critics are hailing Motorola's tablet as the first worthy competitor to the market-leading iPad. Apple has sold more than 15 million iPads since its debut less than a year ago.

But Apple's coveted tablet computer has the edge on Motorola when it comes to price. A 3G iPad can be had for $629 but doesn't require a contract. The Xoom without a commitment costs $800.

Cell carriers use contracts as a way to subsidize the cost of the hardware over the two years that customers agree to buy monthly service. Verizon and AT&T don't offer subsidized iPads.

The entry-level iPad model, which only has Wi-Fi connectivity, costs $500. Motorola will also offer a Wi-Fi-only version of the Xoom, but the company hasn't provided a price or date for when that will happen.

Sanjay Jha, the company's CEO, told the Wall Street Journal that a Wi-Fi version would be "meaningfully cheaper. The price is set by iPad at $599, and we will be right around there."

Jha defended the price in that report, saying the free 4G upgrade "would justify the $799 price point." He added: "Being competitive with iPad is important. We feel that from the hardware and capabilities we deliver we are at least competitive and in a number of ways better."

Apple has long boasted about the iPad's competitive price. A slogan on the company's website says the iPad is "magical and revolution" and sold "at an unbelievable price." Wired recently explained why it may be hard for competitors to match the iPad's price.

The Xoom is the first tablet running the new version 3.0 of Android, called Honeycomb and designed specifically for tablets. The device can store 32 gigabytes worth of files and has a pair of cameras for video chat.

Unlike the iPad, the Xoom will come with a Flash video player. Adobe Systems says an updated version of Flash will be available to download "within a few weeks" after the Xoom's release.

Apple is expected to announce a new iPad as early as Wednesday, March 2. Verizon, which recently began selling the iPhone 4 and sells the iPad in its stores, is also likely to carry the new iPad.