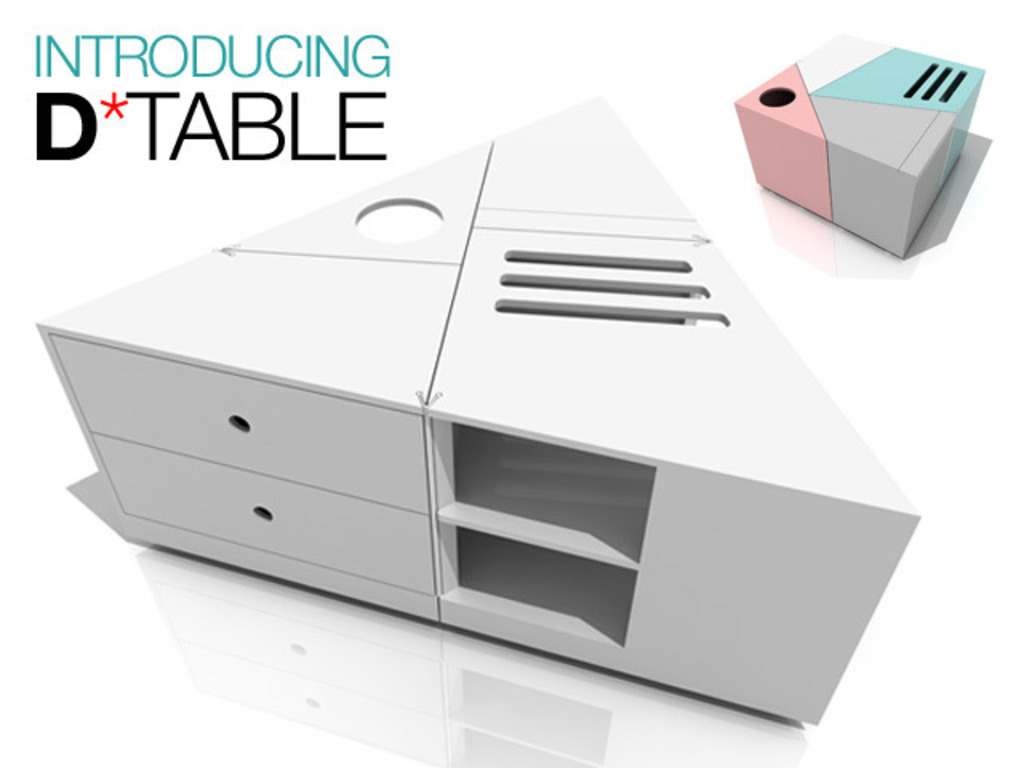 The D*Table, 8 tables in 1 but infinite possibilities. Read more

The D*Table, 8 tables in 1 but infinite possibilities.

A Swiss Army Knife of a table

Inspired by mathematics, D*Table is a fully functioning 3d puzzle that translates its form into a flexible and adaptable low/coffee table. The cube-like form can be transformed into the triangle, showing off D*Tables' clean lines and flexible geometries. Long sweeping movements create a sense of energy in the table that invites the user to interact with it. D*Table can be celebrated as the centre piece of a room or is equally suited to sitting along a wall on in the corner of a room.

The flexible design means that D*Table can be adapted to compliment any living space, while the clean lines make it a stylish addition to any home.

Functions literally unfold as the table is opened. Great as a storage box when in square formation, D*Table can hide your every day life away inside its inbuilt storage. As the table is made up of four individual units, each with its own purpose, every part of D*Table has a unique functionality.

PERFECT IN ANY ROOM

WHAT DO OTHER PEOPLE SAY ABOUT OUR PRODUCTS?

The D*Haus Company was established in 2011, after the first D*Dynamic prototype was chosen to appear as part of the Royal Academy’s annual Summer Show in 2010, where Sir David Chipperfield hand picked the model to appear alongside him on the BBC Culture show.

Since then, we have appeared in a number of exhibitions in the UK, international magazines, journals and television features around the world, and have been short-listed for a number of awards including The Blueprint Design Awards 2011 and Dezeen's Top Videos of 2012.

"Britain has set the bar high for ingenuity in design and it continues to surpass its own standards. Take the new London manufacturer / incubator D*Haus, whose convertible table pays homage to Henry Ernest Dudeney, the mathematician who worked out how a perfect square can evolve into an equilateral triangle." - Globe and Mail Newspaper, Canada

- Finalise the development of our custom hinge for D*Table

- Get the product into shops

We want to make our products available to the public, starting with The D*Table. Prototyping and designing innovative products isn't easy, but the more support we have here, the closer we are to getting D*Haus moving! We have already found a reliable manufacturer for our D*Table and developed several prototypes, but we now need to perfect the details before we release it to market.

As part of our Kickstarter campaign we will be offering a selection of our D*Haus products as pledges. Every backer will receive regular updates on our progress, be named on our website and their name will  will also be added to a time capsule that will be planted under the foundations of the first Dynamic House.

A first in the world of architecture, the D*Haus was inspired by the "Haberdashers Formula", discovered by the mathematician Henry Ernest Dudeney in 1903. He worked out how to turn a perfect square into an equilateral triangle by dissecting the square into four distinct shapes. The D*Haus applies this formula to architecture, creating a house that can be transformed from a square into a triangle, with a multitude of combinations in between.

The D*Dynamic was originally conceived as a living solution for people in the Arctic Circle. The dynamic design meant it could be adapted to suit the changing environment – the ‘closed’ square shape offered insulation to protect and heat the inhabitants during the harsh, dark winters, while the ‘open’ triangular shape enabled them to enjoy the long hours of sunshine in summer.

The D*Haus formula can be applied to both static and dynamic buildings, offering a flexible living solution to suit all budgets and environments.

Many thanks to Ivan Ogilvie for producing the video, AVR London for the 3D visuals of D*Haus and all our friends and family who have helped us to get this far.

D*Table:
We have already found a reliable manufacturer for our D*Table and developed several prototypes, but we now need to perfect the details before we release the table to the market. Our current challenge is to create a custom designed hinge that is easily removable and allows the right type of movement to ensure successful transition from one form to another.

Before the table goes on sale we will be testing all the component parts – from the paint finishes to the wheels - to ensure that the final product is as hard wearing and functional as it is stylish.

D*Dynamic:
There are numerous risks and challenges that come with any construction project, particularly when working with such an unconventional design. No one has ever done exactly what we are attempting to do, so there will inevitably be issues that we will need to resolve as we go.

Fortunately, we have been blessed with a remarkably talented and supportive team of advisers and partners who help us to overcome challenges. Our structural engineer has an extensive background in moving buildings and we are also lucky enough to have support from a number of world leaders from the mechanical and automation industries who are lending their expertise to the project. By working with these partners, and taking advantage of their extensive knowledge, we are confident that we can overcome any challenges that we might run into.

The D*Haus Dynamic is a work in progress, but we have taken every step in preparing and we are more than ready to hit the ground running should we reach our funding target. With your help we can make D*Haus a reality!

Learn about accountability on Kickstarter

Ask a question
Report this project to Kickstarter

Sign up for our Happening email for all the inside info about arts and culture in the Kickstarter universe and beyond.