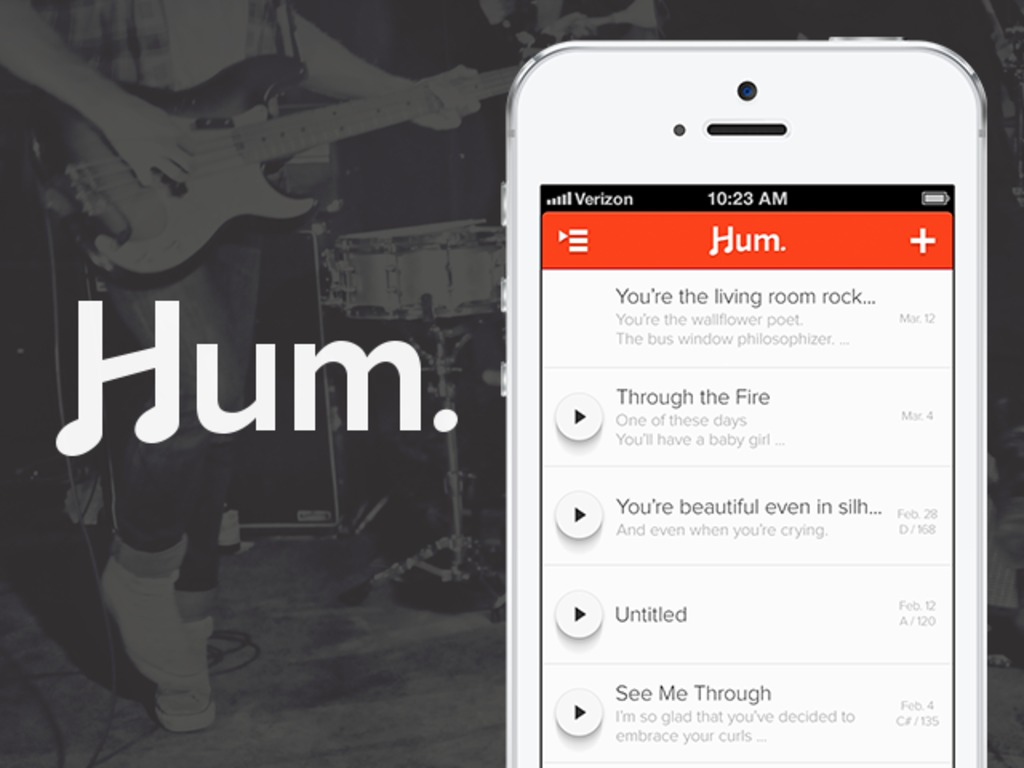 Your lyrics shouldn’t be between shopping lists—and your songs sure as hell aren’t voice memos. Get organized with Hum. Read more

Funding for this project was canceled by the project creator on July 15, 2013.

Your lyrics shouldn’t be between shopping lists—and your songs sure as hell aren’t voice memos. Get organized with Hum.

We're raising money to build an iPhone app for songwriters. It's called Hum. It organizes all your ideas, lyrics, melodies, and riffs, into one single, sortable place.

Hum is Lyrics, Recordings, and a Tuner all in one place.

Most musicians we’ve talked to have similar songwriting processes. We play a bit on the guitar or piano—whatever our instrument of choice is. We stumble across a riff or progression that we want to remember or build on. We open our iPhone to Voice Memos and record about a minute or two. If it’s really solid perhaps we’ll give it a name or share it with bandmates.

The problem is once ideas are in a voice memo, they’re often lost. You can’t sort them. They’re hard to revisit. Names are based on the date they were recorded. You have no idea what key they’re in or how your guitar was tuned.

Meanwhile, your lyrics are collected as Notes. They exist between shopping lists and to-do lists. If you want to record something you have to hop between these lyrics and Voice Memos. It's lame. Context is important.

Hum was born from the desire to have everything in its right place.

Hum is an audio recorder meets note-taking app. It organizes things by song. You can start with a recording first, or your lyrics. You can combine them or keep them separate.

Immediately after recording something you're prompted to give the song its key, tuning, and mood. You can assign a root note to the recording. You can also apply tuning and mood-based metadata.

With its built-in metronome and tuner, Hum keeps you in time and in tune.

Need a little pre-roll? Want to make sure that last chord rings out and fades away? Don't worry; Hum lets you trim the fat.

You can loop your recordings while writing lyrics. Sometimes you just have to hear that chord progression over and over again.

After funding, we'll spend the following 2 months finishing development of the app. The design is 99% complete. Beta testers will get their codes about 3/4 the way through the development process. We'll be giving updates and blogging the whole process.

Apart from the app, our amazing backers will get our patented Swag Bag. It comes with stickers and picks.

We've also got a badass heather gray t-shirt that has our logo on it. Beta users will get a special beta tee. It's SPECIAL.

You'll be able to choose between each one of these posters. Some let you have all three. Note that they don't come with the frames but they'll fit an Ikea Ribba perfectly.

And that's just the beginning. From custom designs by the Hum team to making your band the backbone of Hum's branding, we've got kickers of all shapes and sizes. Take a look at the pledge panel for more details.

Building software is difficult. Ecosystems change. SDKs change. New devices are released. We're going to keep our initial timeline tight and our product small to deliver on time and on budget. Thankfully, this isn't our first rodeo and the three of us have been building software and websites for our entire careers.

Like every iOS developer, we're subject to Apple's app-approval process. We're confident our app will be approved, but we can't guarantee there won't be a hold up in approval time.

Learn about accountability on Kickstarter

Ask a question
Report this project to Kickstarter

Sign up for our Happening email for all the inside info about arts and culture in the Kickstarter universe and beyond.