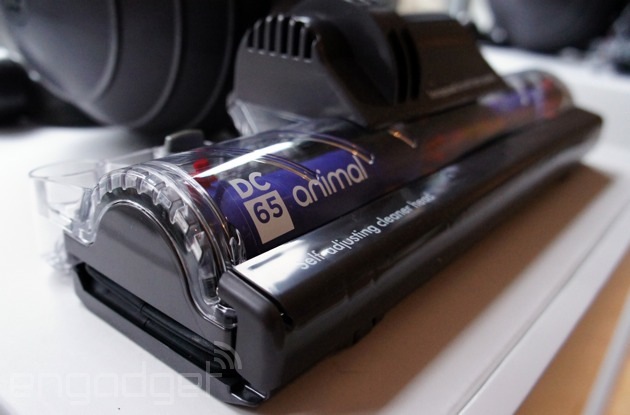 Over the years, Dyson's managed to vault its line of household suction beasts into the world of enviable gadgets -- a rare feat for a home appliance. And the company hasn't been sitting on its laurels with recent successes: Dyson's engineers have been hard at work to make them smaller, lighter and more powerful. The latest upright and hand-vac models -- the DC 58/59 and the DC65 -- are a testament to this ethos.

While the sleek, space-age design has remained virtually unchanged from previous models, there are a series of under-the-hood improvements and some of the changes were tailored specifically for the US market. The new DC65 upright vacuum arrives in three flavors: Multifloor ($499), Animal ($599) and Animal Complete ($649), and boasts a remodeled airflow and new brush design, which are said to improve suction by 25 percent. For wire haters, the cordless varieties got overhauled too in the DC58 ($250) handheld and DC59 ($500) digital slim; both arrive with Dyson's new V6 digital motor that hits 110,000RPM to get at those fine specks of dreck that have settled into your floor's nether regions. All these models will be landing at Best Buy starting January 19th, just in time to prepare for spring cleaning.

Update: Dyson's initial release estimates were incorrect. The DC65, DC58 and DC59 will all be available starting January 19th.

The Engadget Podcast is live at 4PM ET!