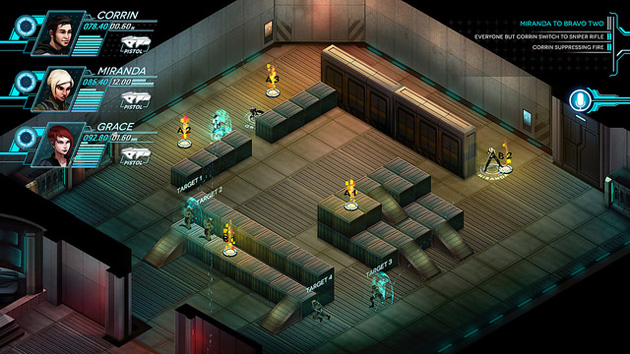 Voice-controlled gaming isn't quite as easy to pull off on the PlayStation 4 as it is on the Xbox One (that Kinect comes in handy), but Iridium Studios is out to prove that it's no big challenge. The developer has revealed that it's bringing its crowdfunded squad strategy title, There Came an Echo, to Sony's console. As on the PC and Xbox, you can order your team around using little more than your voice. While the gamepad is very much usable, it's not completely essential to finishing your mission.

The game's voice system isn't elaborate. Whether you're on the PS4, PC or Xbox, you're using canned (though expandable) commands to get people moving. However, that also means a consistent experience across platforms. And no, you won't need a PlayStation Camera to get the full experience -- the earpiece that came with your PS4 will do the job.

As to when you'll get a copy? That's the tricky part. While Iridium explains to us that development has been "remarkably easy" on the PS4, including early voice programming, it isn't certain just when the game will reach the PlayStation Store. The PC version's planned October release on Steam (with support for Intel's RealSense voice technology) takes priority. There's a chance that the PS4 and Xbox One editions will come out at the same time, but the studio says it's willing to delay their launches if necessary. In the meantime, you can always check out the trailer below.

Talk about the Sony PlayStation 4 with other people who own it too!

Talk about the Microsoft Xbox One with other people who own it too!